The city of Jaffna had the privilege of hosting the first Climathon in Sri Lanka. Climathon is a global movement and the largest climate action collective of its kind, inspiring community and citizens to gather, create and implement solutions to the imperative effects of Climate Change. The event encourages people to operate at a local level and create effective change in their cities, whilst creating a global platform for entrepreneurs, students, developers and citizens to get together to solve pressing climate issues as well as the issues Jaffna faces as a region. The Organic Movement of North East (OMNE) together with Dilmah Tea brought Climathon to Jaffna, a region that is highly susceptible to the detrimental effects of climate change.

An initiative aimed at raising awareness about climate change as well as to seek future-oriented solutions for Jaffna, Climathon aims at translating climate action solutions into tangible projects. The initiative also focuses on supporting climate-positive businesses and start-ups as well as addressing local policy changes.

It is estimated that the food system contributes to 30% of global carbon emissions and it goes without saying that it has a massive impact on the climate. Over 60 participants including students, young entrepreneurs, scientists and professionals worked over 2 days to create solutions that would enable the participants to come up with sustainable solutions to fight the ‘Urban Food Crisis in Jaffna’.

"Climathon not only raises awareness but has managed to bring people from diverse walks of life together. I think it’s high time we take climate change seriously"

Over 600 schoolchildren, youth and adults being educated on Climate Change over the two-day event, through diverse mediums of art including drawing, photography, song, drama and debate, Climathon Jaffna was nothing short of a hub of knowledge, through which the future generations of the country had the opportunity and the liberty to address issues such as climate change and the impact it has on the region in a creative and unconventional approach.

Jekhan Aruliah, a business advisor who facilitates entrepreneurs of the region has been working in Jaffna for the past four years. “Climathon is an amazing opportunity to the people of Jaffna when it comes to making a change in the region, and it’s another baby step towards saving the planet. Although Jaffna still holds its traditional methods close to heart, the people here are able to offer new ideas, or old ideas rather, reframed in a new way. Aruliah believes that there is immense potential to lead change in the region. “I’ve seen successful entrepreneurs come back from overseas, some of whom are indigenous to Jaffna. So there is a particular opportunity with climate focus on products and services and I hope to see the participants come up with solutions that are sustainable and commercially viable,” he said. 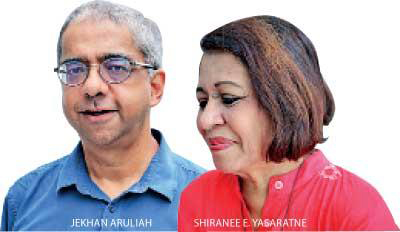 "Climathon is an amazing opportunity to the people of Jaffna when it comes to making a change in the region, and it’s another baby step towards saving the planet"

“The livelihoods of most people in Jaffna depend on agriculture and fisheries. The climate and even little changes in the climate have a huge impact on the biodiversity of the region which undoubtedly has direct impact on the livelihoods of the locals. It is vital for cities and even regions to adapt to the changes in the climate all the while doing their part to conserve natural resources. Given that our country is very small and the carbon emissions from Sri Lanka are not very significant, it is important to know that ultimately, regardless of how little our carbon footprint is, if we aren’t able to regenerate the resources we exhaust it would have a very significant impact on Jaffna as a region, and the country as a whole,” said Shiranee E. Yasaratne, an advisor for Biodiversity Sri Lanka.

“Climathon not only raises awareness but has managed to bring people from diverse walks of life together. I think it’s high time we take climate change seriously,” Shiranee added . In order to effectively address Climate Change in Sri Lanka and if climate change is to be tackled on a local level, it is important to stay united across multiple tiers involving technical expertise from scientists and researchers, the backing of corporates and businesses and especially the government is imperative. Climathon Jaffna could be the stepping stone towards addressing climate change at a local scale. While creating this awareness is important, it is imperative that this be followed in action as well.