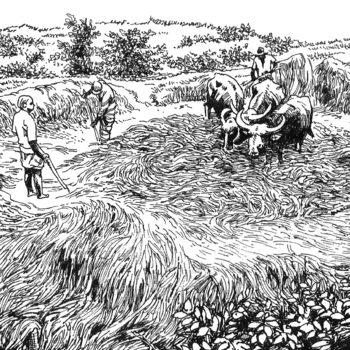 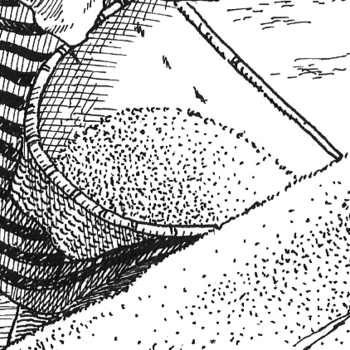 A Kamatha in Sri Lanka refers to an area on the ground where farmers temporarily store their harvested paddy. There are many types of Kamatha such as ‘Gal Kamatha’, Bim Kamatha’ and ‘Vel Kamatha’, of these, Bim Kamatha is the prevalent type. Bim kamatha is set up on a chunk of land located in close proximity to the paddy field. A Kamatha is alternatively known as ‘Kalavita’, thus the melodic rhymes often sung by farmers on a Kamatha are known as ‘Kalavita Piritha’.

The Kamatha or the threshing floor would be cleaned and prepared before paddy is stored. Plants and weeds growing on the selected area would first be removed using a mammoty (garden hoe); farmers would ensure that no damage is done to the earth of the Kamatha when clearing is done. A besom called ‘Bolaththa’ is used to clear away the debris.

A mix of clay, derived from anthills, and cow dung is applied densely on the ground of the Kamatha to level it. The dried mix ensures that the Kamatha is free of dust and impurities by separating the paddy harvest from the earth below.

Generally only men engage in the cleaning process of the Kamatha.

Kola Madeema is the process of separating paddy seeds from the paddy pods. For this, farmers first fix the stem of a strong tree such as, Mahua (mee), Arjun tree (Kumbuk), etc., at the center of the Kamatha. This is called a ‘Vee Gaha’ and five or six oxen are made to rotate around it during threshing. The trimmed rice pods are placed around the Vee Gaha and the oxen would walk roughly on them, separating the paddy and seeds from the pods as they do. The separated paddy would get collected to a large mat called the ‘Magala’ which is spread on the Kamatha.

Oxen employed in the process are held in high regard. Often Kola Madeema (threshing) is done during morning or evening hours, as the afternoon sun presents too harsh conditions for the oxen to work. In some areas the process is conducted at night. The oxen are given a day’s break before being taken to the next Kola Madeema session, and they are allowed to eat the separated paddy stems while walking over the rice pods.

When oxen are ready to defecate, a farmer would hold a mat woven using paddy stems, underneath to collect the cow dung in it. This ensures that the dung does not mix with the paddy.

Ancient Sri Lankan farmers dedicated their paddy crop to Lord Buddha; as such, paddy is respectfully known as ‘Buddha’s Crop’. As the Kamatha is a place where Buddha’s Crop is stored temporarily it is, by association, a sacred place.

Farmers use unsophisticated tools such as ‘Ukunu Detta’ (pitch fork) to remove paddy stems and ‘Katumana Atta’ to heap paddy seeds on to the sides of the Kamatha. Husks and refuse are removed from the paddy seeds; cleaned seeds are known as ‘Betha’ in Kamath Basa. Measuring equipment such as ‘Karthuwa’, ‘Laha’ and ‘Kuruniya’ was used in the past to measure the Betha. After measuring, equal shares are allocated for those who labored in the production process. A farmers’ foremost share of paddy was always offered to the Budhha. The rest his share is divided into the portions, one for consumption and the other for seeding purposes.